Illinois Fair Tax Vs. Flat Tax: Why A Flat Tax Is Not Fair

Opponents of the Illinois Fair tax are making a ton of arguments that don't hold water if you get a few people together and have a thoughtful discussion, as I've been doing lately.

Today, we'll discuss the semantics of the word "fair" One of the first things that is said is "Isn't the Illinois flat tax system fair because it charges everyone the same percentage tax rate?"

There are at least three lines of conversation and rebuttals to this erroneous line of thinking that relates to the concept of taxation fairness, the Illinois flat tax and the Illinois Fair Tax.

This argument that we all pay the same tax rate in the Illinois flat tax system just isn't correct.

It turns out that wealthier individuals are better at lowering their AGI than lower-income and middle-income taxpayers for a variety of reasons.

Conservation easements, captive insurance plans, tax loss harvesting, qualified business income deductions, tax-optimized defined benefit plans and wealth accrual via capital gains or inheritance (both taxed at low rates or subject to tax timing optimization) are just a small subset of the many methods the wealthy use to minimize AGI and federal taxes.

Most of these tax breaks have been written into our tax code at the bequest of lobbyists who work for the rich. Poor people can't afford lobbyists, and the system is egregiously tilted in favor of the wealthy.

The Supreme Court decision on Citizens United, probably the most ironic name ever for a legal case plaintiff, has only accelerated the tilting, effectively allowing the wealthy to buy government power and codify into law whatever they want. And, boy oh boy, do they want.

Even tax breaks that are ostensibly good policy are prejudicial to those who earn less.

A $500 charitable donation made by someone in the 10% tax bracket is worth $50.00 as a tax reduction. But that same donation is worth $122.50 to someone in the 35% tax bracket. In other words, two individuals take the same action, but the wealthy individual ends up with $72.50 more in the bank than his poorer citizen. This is one of many ways that the rich get richer, in ways that most of us don't even realize.

As a bonus to the wealthy, who have figured out how to pay less in federal taxes and to lower their AGI, that then trickles down to allow the rich to pay less in state taxes on a percentage basis than lower income taxpayers.

Say you start out at $50,000 in earnings. Twenty miles north of you, a wealthy individual makes 10X what you make. We'll call him Mr. Potter for the sake of this example.

You don't have time or money to hire a tax advisor to help you optimize your AGI, so you'll end up paying 4.95% (the current Illinois flat tax rate) as your tax rate and contribute $2,475 in income tax.

Mr. Potter, on the other hand, uses some rich-person-tax-break magic to lower his AGI to $400,000. Assuming no other adjustments for the sake of simplicity, the Illinois flat tax system will have him pay $19,800 in Illinois state income taxes.

But aren't there some tax breaks that the poor get? Yes. There are some.

But they are nothing in comparison to what the wealthy have finagled. In fact, if you think long and hard about it, you might come to the conclusion I've come to, that tax breaks given to the poor are not given out of concern for the poor but are instead given by the wealthy's worst elements to give the impression that they care and to avoid revolution in the streets, which is bad for the wealth business.

I should pause to go on record as saying that there are plenty of good wealthy people, and I hope that they will support the Illinois Fair Tax. I'm not one to demonize the rich or to demonize capitalism as a whole, but I would simply argue that the bad actors have taken over the game, and it's time to tell them that enough is enough.

#2 But What About the Absolute Amounts of Taxes Paid by the Wealthy?

So far, we've covered that the wealthy have a way of minimizing their federal taxes, which in turns helps them to minimize their Illinois taxes to an extent that is much greater than what the rest of us can do.

As such, those who try to convince uninformed Illinois voters that we all pay the same rate and that's fair should hope to God that people stay uninformed when they vote and don't get educated by reading articles like this, or simply taking the time to think things through.

But we are not done with the fallacious arguments made against the Illinois Fair Tax in favor of the Illinois flat tax.

Isn't that discrepancy, when we look at the actual amount of monies paid, unfair? Potter is paying more than you, isn't he?

Again, the uninformed might fall prey to this propaganda from the conservatives, whose primary conservation goal, as far as I can tell, is to conserve their money.

OK, I do know a few principled conservatives for whom that is not their primary motivation, but I do always wonder if they haven't been co-opted to support a cause that really doesn't hold up logically, mathematically, ethically, spiritually or economically. (Sorry, I had hoped to make this non-partisan but occasionally my true colors, i.e. various shades of blue, do shine through. Forgive.).

I digress. Let's get back to the topic of absolute-dollar taxation.

It's a strange concept, that Mr. Potter's dollar is worth less to him than your dollar.

After all, the same little piece of paper will buy a cup of coffee at McDonald's regardless of whose hand it's in, yours or Potter's (Potter prefers Starbucks, by the way.).

But I would ask you to just ruminate on the idea that you can't just look at the absolute amounts people pay in taxes but instead should look at the impact of the amounts they pay on their quality of life, based on the starting point of where they are at in terms of wealth and income.

The principle is called the Moral Value of Money, and it's worth learning about.

If your thinking is that Mr. Potter worked harder for his money and shouldn't be penalized for it, and that those who have less income must surely just be stubbornly indolent and should simply work harder, well, that's a slightly different conversation that we can have some other time. In my talks with my conservative friends, none of them brought that one up, thankfully.

For now, let's limit the conversation to what's fair and what's unfair. My point here is that there is no unfairness in the wealthy paying higher taxes in terms of absolute dollar remittances.

I suspect, short of a few outlier psychopaths, most would make that assessment based on more information than just the absolute amount of food contributed. I hope so, anyway.

#3 Broadening the Discussion to Other Illinois Taxes

Of course, the Illinois income tax is just one of many taxes that Illinois residents pay.

Some oppose the Fair Tax with the flawed thinking that we have too many taxes already and shouldn't do anything with the income tax. Others home in on a single tax, making the wrongheaded argument, for example, that property taxes are way too high, and this Fair Tax is just one more tax.

I'll cover these topics in other articles, but consider for a moment that maybe Illinois has as many taxes as it does because we adopted the Illinois flat tax in 1969, which limited our ability to raise funds and thus necessitated the creation of myriad other taxes. Consider that your property tax is high because we don't have the Illinois Fair Tax in place, and that passing the Fair Tax can actually allow your property taxes to get lower in the future. Is it possible that you're fighting the Fair Tax because of what ails you, when in fact the Fair Tax is the cure for what ails you?

If you do think that through, know that I appreciate your being open-minded about it. We are spoon fed so much that we don't think through. It's heroic in many ways to just question what you've heard and do the thinking on your own.

Let's get back to the discussion of Illinois' not having just the income tax and having all those other taxes, and discuss how that relates to the pros and cons of the Illinois Fair Tax versus the Illinois Flat Tax.

When we look at the total picture in Illinois taking into account all taxes, the Illinois tax system just gets more unfair, which argues for passing the Illinois Fair Tax to alleviate some of the unfairness in Illinois' other taxes, wouldn't you agree?

Looking at taxes paid as a percentage of discretionary income, we see that Illinois has a seriously regressive tax system, which means our poorest individuals are doing much heavier lifting on funding the state's needs, which benefit all of us, than our wealthiest individuals. Middle class families, a dwindling population due to the increasing concentration of wealth in this country I might add, also are paying more than their fair share. 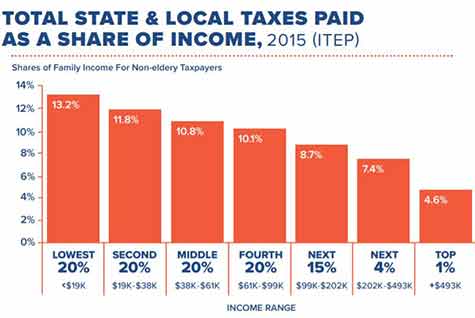 As you can see from the chart, the lowest 20% of Illinois income earners pay almost triple the effective tax rate of the wealthy, when you factor in sales tax and other taxes.

That earns Illinois the dubious distinction of overseeing the Fourth Most Regressive Tax System in the United States. No wonder so many low-income and middle-class families are leaving for other states. Not only does the Illinois tax system encourage people to leave Illinois because of its unfairness, it also results in the State of Illinois not being able to fund important things like schools.

Ironically, the Opposition would have you believe that people would leave Illinois if we move to the Illinois Fair Tax.

Again, that's just propaganda. People are leaving Illinois now because of the Illinois Flat Tax and the harm it does to Illinois residents, our needs and what most of us stand for. It's brazen and twisted to argue the opposite, if you think about it.

The Final Verdict: The Illinois Flat Tax Is Unfair

I hope I've at least made you question the idea that a flat tax is fair. It's not.

The Illinois flat tax isn't flat either. The wealthy pay a lower rate.

The idea that the rich already pay their fair share, paying more in total than the poor, is an argument that is designed to make you think up is down and down is up. The absolute dollars are not what's at stake here. The impact on human lives is what is at stake here.

Finally, when we look at Illinois taxes holistically, we can see there are some serious wrongs to be righted. We've unfairly overtaxed the people who can least afford it.

Adding insult to injury, that inequity has enriched the wealth of our richest households in Illinois, adding compounded value to it with each passing year that we don't dismantle the Illinois Flat Tax.

Again, I'm not one to demonize the rich, especially those who have worked hard to get where they are, even if they leveraged a ton of privilege along the way.

But, Mr. Potter, can't you afford to give a little more to the great cause that is the future of Illinois?

I think you can.

We appreciate you, we love you, and we just are asking you to do a little more for this great State of Illinois that has allowed you to flourish.

Interested in the Illinois Fair Tax ballot initiative? If so, you will enjoy these articles: